Note: this tutorial has been written for Ansible Molecule 3 (Releases · ansible-community/molecule · GitHub)

To test your roles or playbooks, you can use VirtualBox or Hyper-V to build new VMs with fresh OS installs. It involves a lot of steps (creating/building a new VM, configuring SSH keys and inventory, run the Ansible playbook, destroy VM). This process can be further enhanced using Vagrant (to provision and destroy VM instances) or Docker, for shorter feedback. However, it can be very cumbersome manually dealing with Vagrant and underlying VMs.

Molecule solves this problem by automating this process and can be seen as an orchestrator: it will take charge of spinning up fresh installs & destroy them after the role/playbook has been executed. Depending on the chosen driver, Molecule will provision instances (delegated) or containers (docker and podman) to test against.

In this tutorial, I will use the docker driver as it's the default one and is often a good choice.

If you are interested in learning more about the delegated driver, here is a good write-up: https://medium.com/@fabio.marinetti81/validate-ansible-roles-through-molecule-delegated-driver-a2ea2ab395b5. 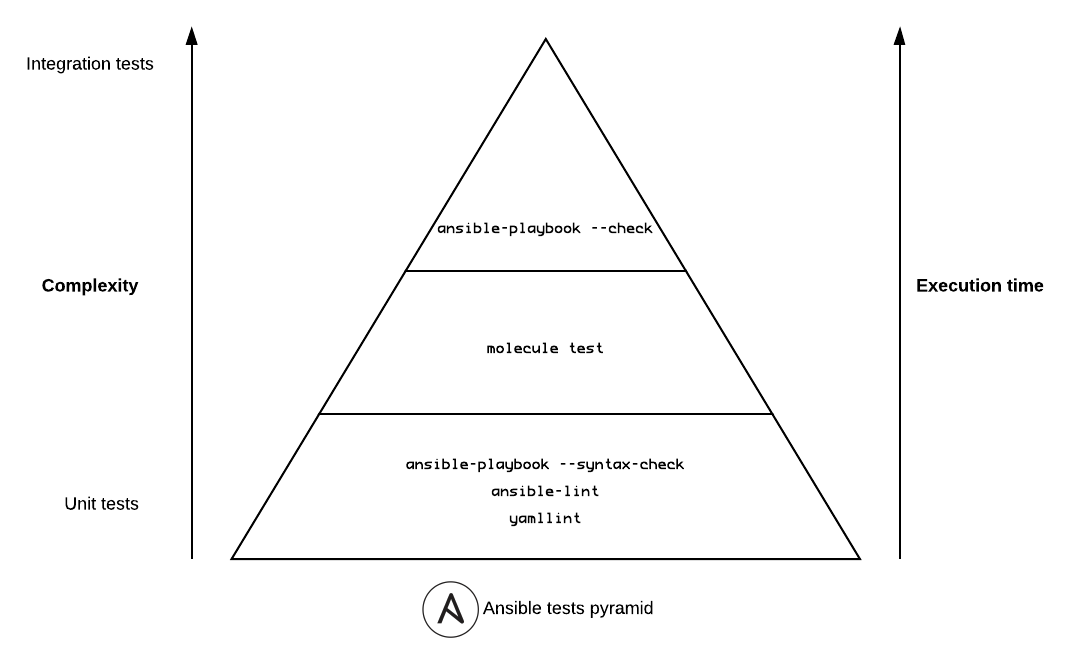 There are multiple levels of testing with Ansible (from bottom to top):

When running tests (molecule test), Molecule goes through a series of steps (the test matrix). Here is a summary:

Additionally, each step can be run independently:

Molecule is easy to install:

Note: The Molecule team highly recommends to install it in a Python virtual environment using pyenv.

If you are not very familiar with Python or don't have any valid Python install, I recommend its use through Docker:

It's fair easy and allows you to get started without installing Python, pip, and its various dependencies.

Ansible's Galaxy users will not be lost as Molecules uses it to generate role layouts. If you are not familiar with Ansible Galaxy, you can review the directory structure here.

The molecule.yml file is particularly important as it is used to configure Molecule.

Here are the most important sections:

As of Molecule 3.0, Ansible is now the default verifier. It simply is an Ansible playbook where you can write specific state checking tests on the target instance. Optionally, you can use Testinfra if you are familiar with this tool. I prefer sticking with the ansible verifier as I don't want to switch language to write my tests. For the rest of this tutorial, I will assume that the verifier is set to ansible.

In this section, you can specify the Docker image used to create the target instance. You can also mount volumes or publish ports. If you want to test against multiple distributions (CentOS, Fedora, Debian), you can use an environment variable:

This section is used to specify an external command that Molecule will use to handle project linting.

This is where you import your role. It simply is an Ansible playbook that Molecule runs right after the instance creation (setup). Typically, this file will be similar to this:

The pre_tasks section allows you to prepare the instance before importing your role.

This file can be run independently using this command:
molecule converge

Finally, the verify.yml file will contain Ansible instructions to verify that your role has been correctly installed on the instance. This another Ansible playbook is run immediately after the role import (converge.yml file).

For instance, here is a verify.yml file used to check that Nginx is correctly serving web requests:

Similarly to the converge step, the verify step will run the verify.yml playbook. This command can be used to run it without launching the entire Molecule sequence:
molecule verify

Molecule will run this playbook against the target instance, created earlier.

As stated at the beginning of this tutorial, Molecule will go through a long series of steps (the test matrix), listed below by Molecule itself:

This test matrix is similar to the Maven lifecycle, for those who know well Maven (welcome Java developers ;).

As the entire test matrix takes some time to complete, a typical workflow when developing a role or playbook could be:

Note: another way to ensure that your playbook is idempotent would be to run molecule converge twice. However you would have to pay attention to the Ansible tasks return values, and check for changed, as specified in the testing steps section.

When your tests are failing, it can be very useful to inspect the created instance to see what's happening inside.

The --destroy=never flag simply tells Molecule to not destroy the created instance after running the tests, allowing you to inspect it:

Login into the instance

To inspect the instance state, simply issue this command:

This will directly logs you into the Molecule instance used to test your playbook against.

Indeed, Molecule uses this directory to store its state (the Docker container name of the created instance for example).

As the test instance is created using Docker (Docker driver), you can also issue a docker ps command and execute an interactive shell on the container:

As the converge.yml file is just an Ansible playbook that is run to execute tests, testing a playbook is quite similar to testing a role. First, issue this command to create a new scenario in your playbook's directory:

Then, instead of including a role in the converge.yml file, simply import a playbook:

Run the molecule converge command to execute the playbook. You can also use a verify.yml file to ensure your playbook works as expected.

Make sure the target hosts in your playbook match the ones defined in the converge.yml file.

The must-read book on this topic is obviously Ansible for DevOps by the famous Jeff Geerling, which is also the author of 99 Ansible roles.

For those who prefer watching screencasts over reading books, here is a great one on Pluralsight, authored by RedHat:
https://app.pluralsight.com/library/courses/ansible-fundamentals/table-of-contents

For an in-depth tutorial, head over this course:
https://app.pluralsight.com/library/courses/getting-started-ansible/table-of-contents

If you don't own a Pluralsight account yet, use this link to get 50% off your first month or 15% off an annual subscription.